How good will the new 360 degree camera be?

Despite moving to the South Coast a year ago, I shamefully only walked the Seven Sisters last month. It was a bank holiday, so what seemed like half of the UK population had chosen to do the same. Walking alone, it was a great opportunity for people watching. There were keen walkers striding along with poles, sour-faced children dragging their feet in protestation at being pulled away from their screens for the day, and puffing tourists searching for the specific views they had been promised online. But, the hordes did have one thing in common: the strange desire to perch right on the edge of the crumbling cliffs to get the perfect selfie.

It’s funny that despite hundreds of “killfies” (the media’s term for death by selfie) occurring in the last decade, we are increasingly obsessed with visually documenting our time for our friends, family, and even strangers, regardless of the risk.

It might just be a fortunate accident of my far-from-teenage age, but I am proud to say that I do not own a selfie stick (yet). However, I am very guilty of feeling a real need to capture what I consider to be the more exciting or unusual things that I do. When a distracted cameraman missed filming my gorge swing in Zimbabwe, I was absolutely gutted. Somehow, without being able to show people proof of the moment, the fact that I had summoned up the courage to do it and loved every second was not close to being enough.

And I am not alone in this, as proven by the prevalence of GoPro cameras attached to the wrists, legs, and helmets of people seeking a burst of adrenaline in the skies, on the land, and underwater.

You will see your fair share of action cameras at paragliding sites too. Some belong to solo pilots who want to document their flights, often to check their technique when trying new acro moves. Some are clutched by walkers or pub-lunchers talking an opportunistic shot of themselves in front of a sky dotted with tiny, colourful wings. And some, well maybe most, belong to tandem pilots.

Understandably, most people who take a tandem flight want a photo or video to capture themselves in flight. Whatever a person’s reason for flying — to seek adventure, appreciate the scenery, or confront a fear — they want to be able to look back on the moment and share it with others. 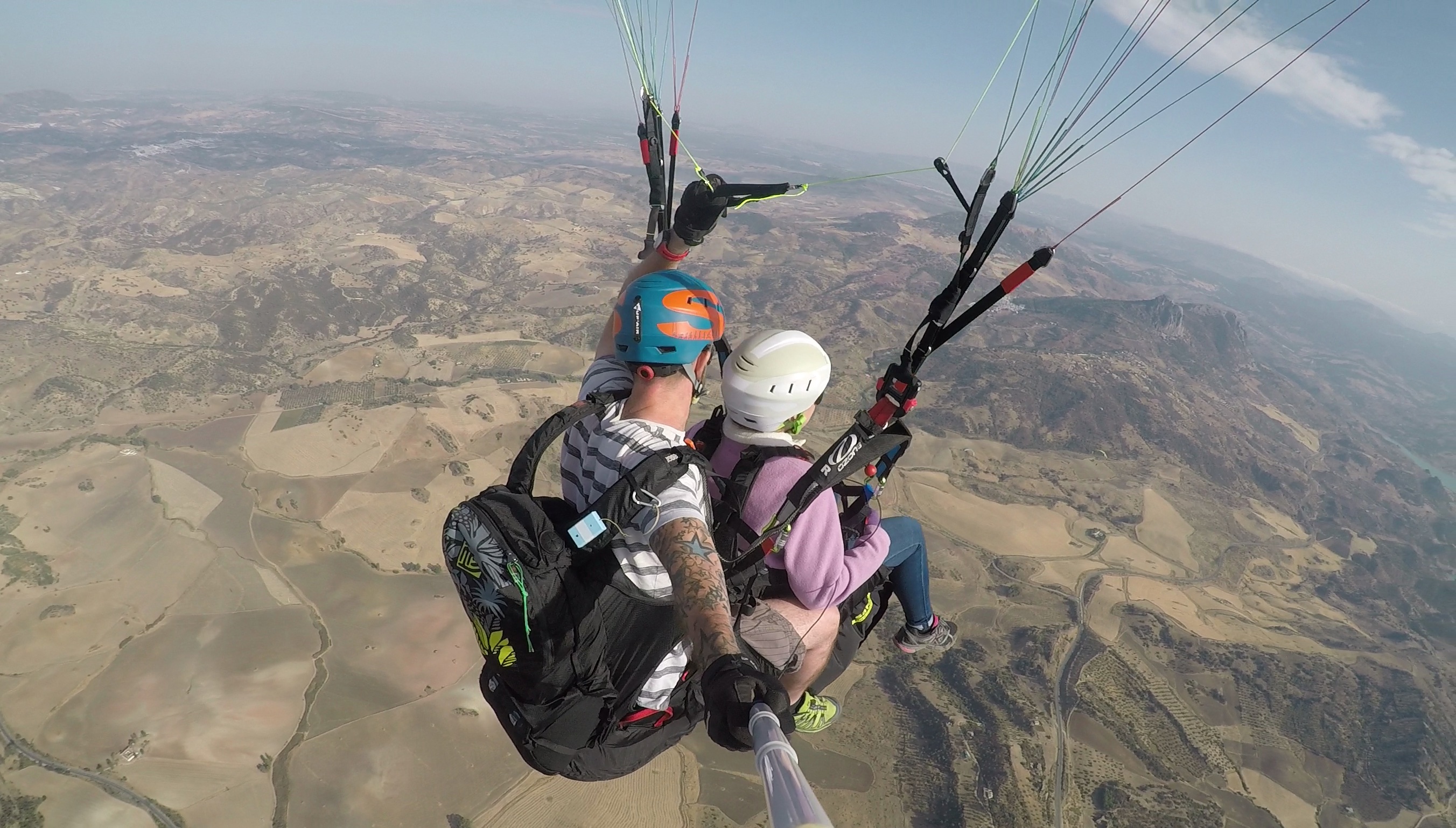 As a result, I was pretty excited when our pilot Ian switched his GoPro for an Insta360 ONE X camera, which can capture a continuous 360-degree view of a flight. It was an excellent excuse for us to have a sneaky little tandem flight at High and Over, soaring over the white horse in Cuckmere Valley and looking down the river towards the sea. 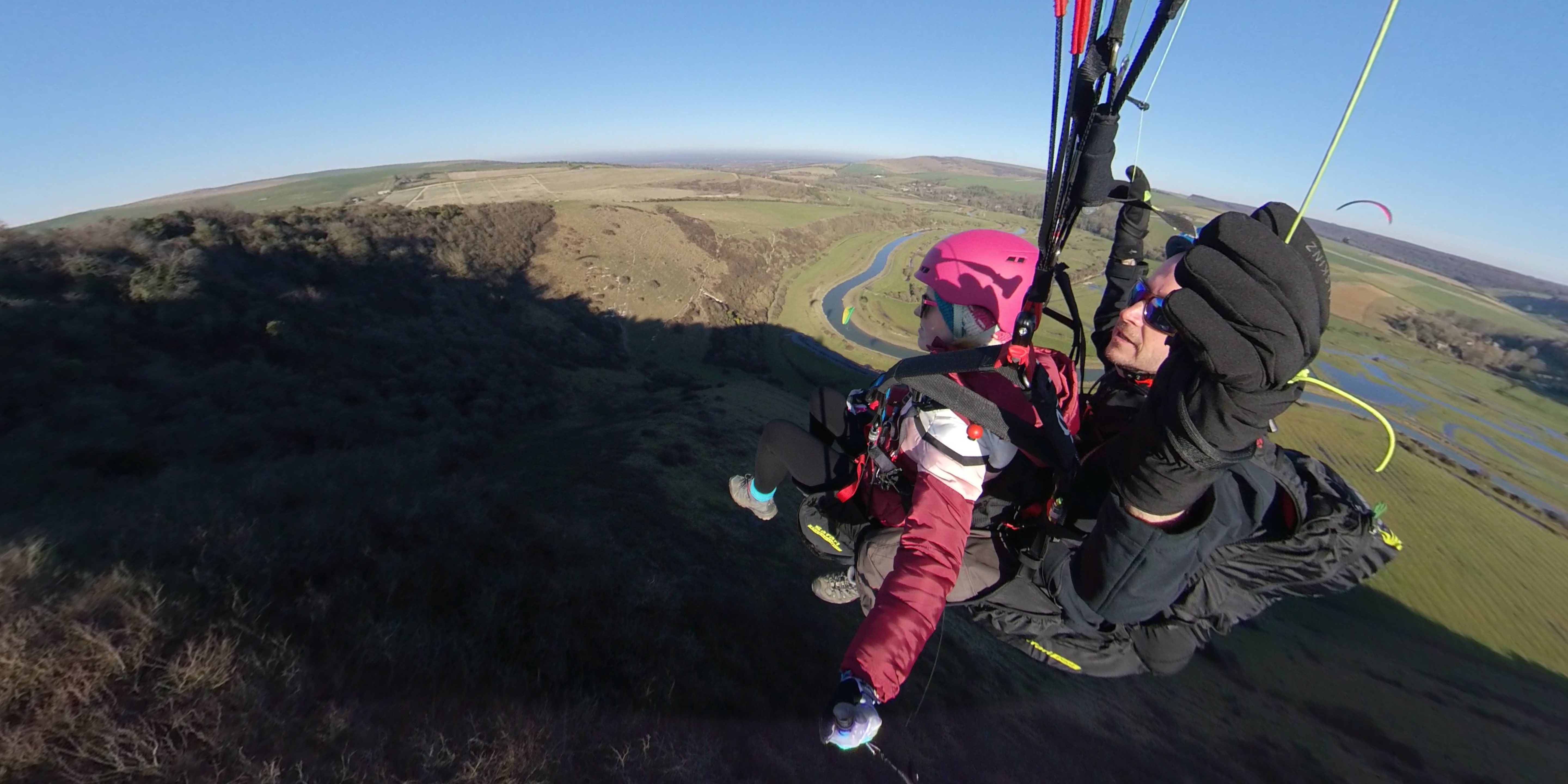 We did a few to-and-fros along the ridge, holding the camera at a variety of heights and angles, before touching gently down and rushing home to check the footage.

I have to admit, even for a non-techy person like me, this camera is pretty cool. You can stitch together a video that mixes the traditional selfie angle with forward-facing views that show what the passenger was able to see at the time. You can also zoom out from the image to show more of the scenery and even make it look as though you are flying miles above Planet Earth! 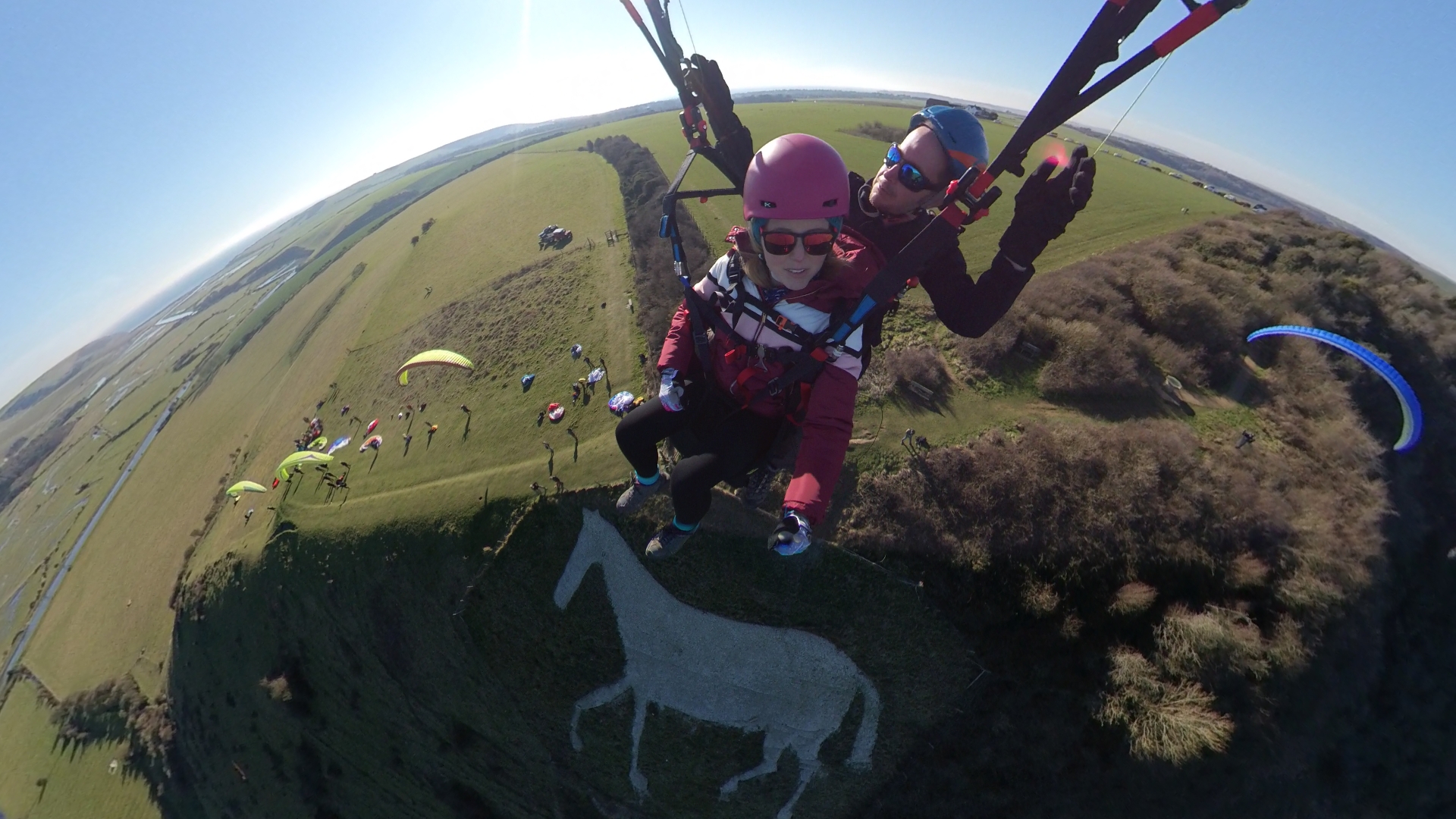 Best of all? In our test video, every time I am about to gurn, point the camera somewhere inappropriate, or introduce the world to my second chin, the footage switches around to a view of the beautiful East Sussex countryside. Lovely stuff.

We are looking forward to learning more about how we can best use this camera to capture people’s special day. Feel free to ask us more about it if you are interested! 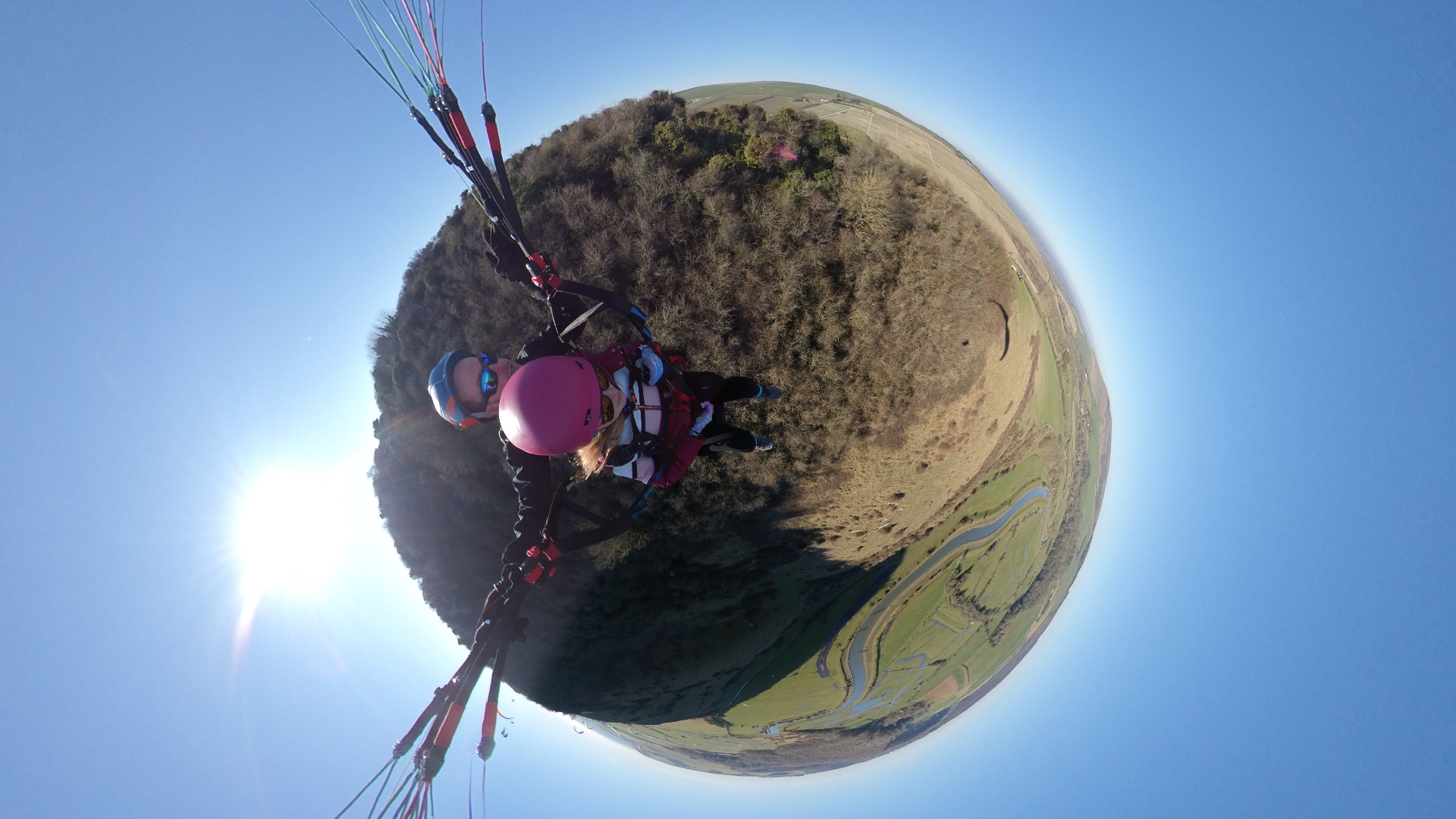 Click here for the 360 degree edited video of the flight